GERMAN Rail (DB) has confirmed that as part of its planned cost reductions for next year it will cease operating all overnight trains with sleeper, couchette and specially-equipped overnight seating coaches from December 15 2016. 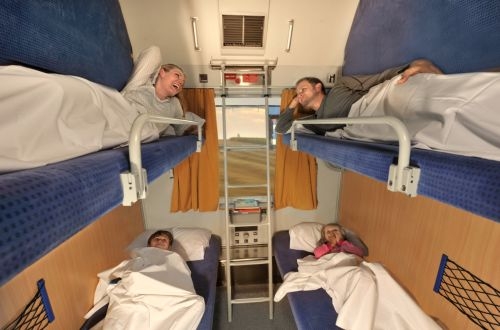 DB says it has tried to "rescue" the night train network in recent years but it remains stubbornly unprofitable. DB has released figures showing its night trains were used by 1.3 million passengers over the last year (around 1% of all long distance passengers). The trains made a loss of €32m on a turnover of €90m and DB predicts similar numbers for 2016.

From December 2016 DB says it will offer a new concept for overnight travel. The company is clear that this will not include any traditional overnight trains but there will be more overnight ICE services. DB suggests that these services, together with new DB-operated international IC Bus links could maintain some of the international connections currently available through the sleeper network.

DB says it will support other rail operators from neighbouring countries that want to continue operating traditional night trains into Germany. Talks are already underway with Austrian Federal Railways (ÖBB) concerning the continuation of its overnight services.

DB may continue operating these trains on a contractual basis but would no longer have any commercial interest in the services beyond December 2016. Other private German rail operators may also take on this work if ÖBB is unable to reach an arrangement with DB.

The focus in recent years on cost reduction appears to have left DB with a much poorer overnight product.

Longer-distance services such as Copenhagen - Amsterdam were lost due to the cost of operating in multiple countries; the service level onboard was deliberately run down, for example the removal of restaurant cars from trains with journeys of over 12 hours, and there was a complete failure to add value or create any kind of premium service.

This led to a spiral of losses as revenues stagnated. In fact, given the pursuit of passenger volume, the average revenue per passenger probably declined.

Industry observers have pointed out that track access charges in Germany are much lower at night, reflecting overall traffic levels at these times, and many of the vehicles used are more than 20 years old so depreciation costs are low. This indicates the operating cost base should have beneficial.

Had management been more positive and market-focussed, the network may have had a future. Equally, the lack of explicit government support for sleeper services compared with other European countries such as Britain or Sweden also contributed to their eventual decline.