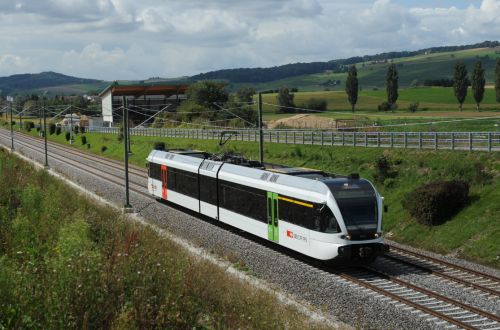 The total yearly volume is 6.06 million train-km. The contracts will become effective from December 2017.

DB Zugbus has been awarded lots 16a, 16b and 16c. The price is reportedly lower than the tendering authorities expected. The contract will last six years and will end when the regional network 2 South line begins operation in December 2023.

In Lots 16c DB Zugbus is to operate the Basle Bad Bf - Waldshut – Lauchringen line, including extended services to Erzingen (Baden), and some trains from Waldshut via Stühlingen and Weizen. Also included are school trains on weekdays and leisure trains on summer Sundays. The total yearly volume is 1.08 million train-km.

In both lots 16a and 16b DB Zugbus will use Stadler class 650 Regioshuttle 1 DMUs which will be equipped with free Wi-Fi. In lots 16c DB class 641 and 644 DMUs will be used. On the stretch between Basle and Erzingen the first class, introduced in early 2016 in class 644 trains, will be abolished to provide greater seating capacity in second class.

SBB Deutschland has won lots 16d, for which electric and GTW EMUs will be used. At present DB Regio runs these train services. SBB already trains on the Schaffhausen, Switzerland - Erzingen line. Starting from December 2017 SBB will operate all services on this line, where an hourly service is planned. The yearly volume is 260,000km per year. Based on the treaty between Switzerland and the Grand Duchy of Baden, dating back to 1852, Baden-Württemberg is obliged to offer train services on this line to a sufficient level.