QUEEN Beatrix of the Netherlands officially inaugurated the 50km Hanze Line at Lelystad station today. The queen then boarded the royal train for Zwolle stopping en route at Dronten and Kampen South. 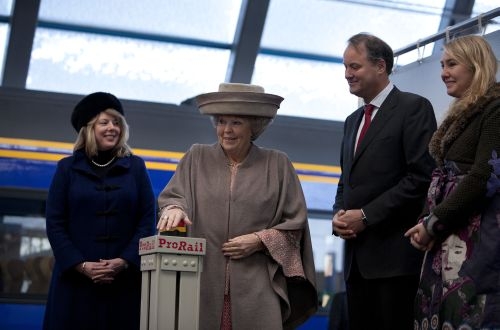 The €1.13bn project has been completed on budget by Prorail, the Dutch infrastructure manager.

Commercial services will start on December 9 and this will enable a major reorganisation of services between The Hague, Amsterdam and the northern cities of Leeuwarden and Groningen, which will be routed via the new line. This will cut about 20 minutes off journey times.

The Hanze Line will be operated with two inter-city and two stopping trains per hour, plus one path per hour for freight. It is expected to carry 32,000 passengers each day, while annual freight traffic is forecast at 4.2 million tonnes.

The project took six years to complete and has 88 structures including a 790m-long twin-bore tunnel under the Drontermeer waterway. The line is designed for 200km/h operation although Netherlands Railways does not have any trains capable of this speed. Conventional signalling has been installed together with ETCS, but trains not fitted with ETCS equipment are restricted to 140km/h.