DUTCH infrastructure manager Prorail has released details of the 2018 timetable, which starts on December 10 2017, where the country’s 40-plus train operators plan to operate an all-time high of over 160 million train-km. This compares with 125 million train-km in 2003. 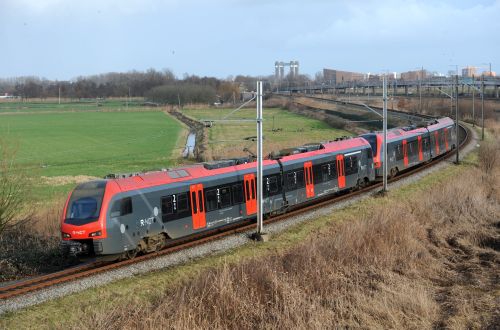 The most notable expansion is the introduction of a 10-minute interval inter-city service between Amsterdam, Utrecht and Eindhoven. This is the first corridor in the Netherlands to have a such a turn-up-and-go inter-city service.

At the start of the new timetable, Keolis subsidiary Syntus will take over from NS the operation of Zwolle - Enschede and Zwolle - Kampen regional services. Electrification of the Zwolle - Wierden section and the Kampen branch will have been completed by then allowing Syntus to introduce a fleet of Flirt three-car EMUs being supplied by Stadler. It is also planned to drop the name Syntus in favour of Keolis soon.

A new cross-border service will be introduced between Hengelo and Bielefeld, Germany. The hourly service will be operated by Eurobahn, a subsidiary of Keolis, using new Stadler Flirt 3 EMUs.

Prorail says that the continuing expansion of train services is bringing the network close to its maximum capacity, especially in the densely-populated Randstad conurbation encompassing Amsterdam, The Hague, Rotterdam and Utrecht, where the demand for paths is very high.

Recently the CEOs of NS, Mr Roger van Boxtel, and Prorail, Mr Pier Eringa, supported by other transport organisations, urged the Dutch government to provide an additional €1bn per annum to prevent traffic in the Randstad from grinding to a halt within a few years.