KEOLIS subsidiary Eurobahn is set to continue to operate Germany's Hellweg regional network beyond the expiry of its current contract in 2018 after winning a new 12-year contract. 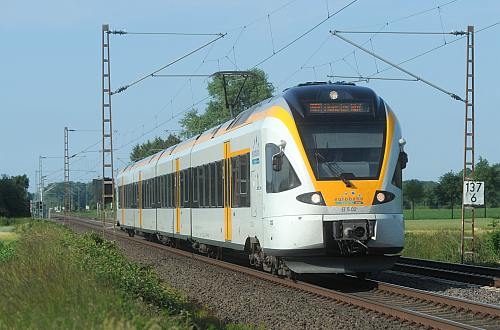 The contract is being awarded following a competitive tender by Rhine-Ruhr Transport Authority (VRR) and Westphalia-Lippe Local Transport (NWL), the latter being the leading authority in the procurement.

The contract starts in December 2018 and covers the operation of around 5.9 million train-km per year on four lines:

Under the new contract capacity on peak trains will be increased, particularly on RB 50 and RB 69 services. The will also be an increased onboard staff presence, including all trains operating after 19.00.

Eurobahn was selected as preferred bidder on October 6 and the contract will be finalised within 10 days if the other bidders do not file appeals against the decision.