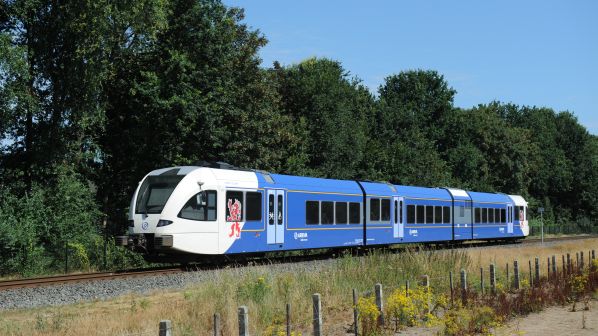 AN agreement has been reached between the Dutch Ministry of Infrastructure, infrastructure manager Prorail, and the provinces of Limburg, Noord-Brabant and Gelderland to cover the extra costs of the Nijmegen - Venlo - Roermond Maas Line upgrade project.

The project involves electrifying the 89km line and introducing partial double track. With the funding agreement now in place, it is hoped that the project will be completed at the end of 2024.

The project initially had a €154.6m budget, of which the Ministry of Infrastructure was contributing €50m. The budget is now €266m following an increase to €213m in 2019. Under the agreement, the Dutch Ministry of Infrastructure will provide an additional €72m and the Province of Limburg a further €24m. An additional reserve of €42m has been secured to cover risks and unexpected expenses to avoid any further delays to the project.

The agreement between the national and regional governments also includes a settlement for possible risks if the project overruns to the concessionaire Arriva, which was awarded the contract to operate the line by the Province of Limburg. If the project will be completed later than 2024, the ministry is to cover 50% the extra costs which Arriva might endure.

The planning process for the upgrade works will now start and authorities are aiming to finalise administration proceedings by the end of 2021, enabling works to start in the third quarter of 2022.

The project involves electrification with 1500V dc overhead and the construction of double track on four sections: north of Cuijk, north of Boxmeer, south of Venray and between Swalmen and Reuver. Some curves will be optimised to increase the maximum line speed while around 20 level crossings will be improved. The station at Nijmegen Heyendaal will also be reconstructed and expanded.

Electrification is reportedly causing problems at the Venlo station because the line uses the section from the Venlo-Kaldenkirchen border crossing to Venlo station, which is already electrified at 15kV ac used in Germany. Prorail is still designing a solution to enable trains to switch between the ac and dc electricity systems. However, rail freight operators fear that the situation might restriction cross-border operations.