CATALONIA Government Railways (FGC) marked the completion of a project to upgrade the Lleida – La Pobla de Segur line on July 24 with the launch of new rolling stock and a significantly improved service on the 89.8km line. 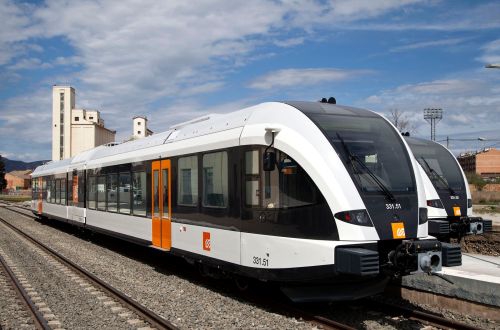 The route was taken over by the Catalan government in 2005 but Spanish infrastructure manager Adif retained responsibility for maintaining the line, as well as train control and staffing the only manned station at Balaguer, while Renfe has continued to operate the train service on behalf of FGC.
FGC took over train control in January, with stations and operations passing to regional control this month.

Over the last decade FGC has invested €45.5m in upgrading the line, including €9.4m for two-car GTW 2/6 DMUs, which were ordered from Stadler in February 2014. The 50m-long trains, which are dedicated to the La Pobla line, accommodate up to 201 passengers, 104 of them seated.

There are now 10 Lleida – Balaguer services per day on weekdays and four of these continue to La Pobla, which was served by just one return train a day in the previous timetable. Weekend services between Lleida and Balaguer have been increased from three to nine return services a day, two of which continue to La Pobla (three on Sundays).

Trains are timed to connect with high-speed services to Madrid and Barcelona at Lleida, and parallel bus services have been stepped up to provide high-frequency public transport on the route throughout the day.

With the completion of infrastructure upgrades and the introduction of new rolling stock, the Lleida – Balaguer journey time has been reduced from 29 minutes to 24 minutes, while Lleida – La Pobla has been cut from 1h 50min to 1h 33min.