Regular services on the Exeter - Okehampton line stopped in 1972. 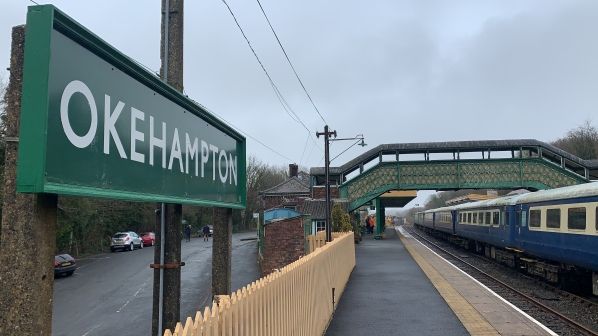 THE British government has announced that it will relaunch a regular service on the 22.5km Dartmoor Line in southwest England after nearly 50 years, the first project from government’s Restoring Your Railway fund to proceed.

Regular services between Okehampton and Exeter were stopped in 1972, although seasonal summer trains began running in 1997. A two-hourly service will launch later this year following a £40.5m investment. An hourly service is expected to be introduced towards the end of 2022.

The Restoring Your Railway fund was launched in January 2020 to reinstate axed local services and restore closed stations across Britain.

Travel times on the line are expected to be 30% less than by car or bus, contributing to a reduction in traffic congestion and associated pollution on the A30 highway.

Infrastructure manager Network Rail (NR), working in partnership with Great Western Railway (GWR), has been carrying out detailed investigations since the beginning of 2020 to understand what infrastructure and railway control system improvements are needed to bring the Dartmoor Line up to the required standards to enable GWR to safely operate trains.

Following the funding announcement, NR will immediately start a range of works on the line from Okehampton to Coleford Junction, where the Dartmoor Line joins the existing line to Barnstaple. This includes drainage, fencing and earthworks, while engineers will lay more than 17.7km of track, replace 24,000 concrete sleepers and install nearly 29,000 tonnes of ballast before running test trains on the track.

Several level crossings will also be upgraded, with new GSM-R masts installed along the line.

Improvements are also going to be made to Okehampton station including installing a ticket vending machine, help point, public address system, information screens, CCTV and free Wi-Fi. A “pay & display” car park will also be introduced with dedicated disabled bays, and the station building and platform will be fully accessible.

GWR expects to introduce passenger service by the end of 2021 with trains running every two hours, seven day a week.

“Returning regular, daily services to this line has been a long-held ambition of ours and was the most sought-after additional routes in our most recent franchise consultation,” says GWR managing director, Mr Mark Hopwood. “We’ve already done a great deal of work with NR and local partners, including Devon County Council, to support those aspirations, and have well-developed plans to have trains running on the Dartmoor Line again.”

“This year is the 150th anniversary of the railway first arriving in Okehampton,” says Mr Richard Burningham, manager of the Devon & Cornwall Rail Partnership. “Long closed, the Okehampton Line will be only the third railway to open for regular passenger services in Devon and Cornwall in 100 years.”

The announcement was made days after the Tavistock Okehampton Reopening Scheme (Tors) submitted a proposal to fully reopen the line from Exeter via Tavistock and Okehampton to Plymouth. The proposal called for the full line to be reopened to provide a second main line to south Devon and Cornwall, which would combine with local bus services radiating from a transit hub in Okehampton.

The existing main line from Exeter to Plymouth, which currently runs via the coast, was closed for eight weeks between February and April 2014 following a storm that caused significant damage to the line.

NR is currently undertaking an £80m project to construct a new sea wall at Dawlish to protect the line, with the first section completed in July 2020.