FIRST Great Western (FGW) has selected Hitachi as preferred supplier for a contract to supply 29 bi-mode trains to replace the fleet High-Speed Trains (HSTs) currently used on services from London to Exeter, Plymouth and Penzance. 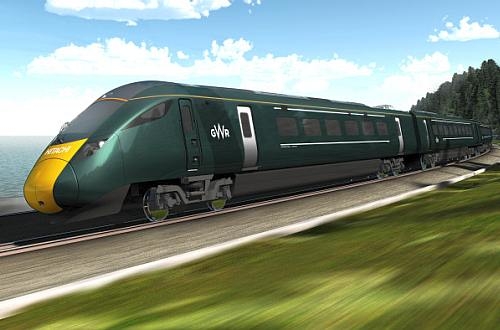 The 225km/h AT 300 sets will be a variant of the class 800 Super Express Trains (SETs) being supplied by the Agility Trains consortium under the Department for Transport's (DfT) InterCity Express Programme (IEP), which includes 36 five-car bi-mode (diesel/25kV ac electric) and 21 nine-car electric trains for Great Western. The first of these trains arrived in Britain earlier this month and the fleet is due to be introduced on services from London to Bristol, Cardiff and Swansea in 2017.

The follow-on order will comprise 22 five-car and seven nine-car trains with an option for 30 additional sets. The trains will differ from the bi-mode SETs already on order, being equipped with more powerful diesel engines to cope with severe gradients west of Exeter and extended-range fuel tanks required for longer-distance services to Plymouth and Penzance. The trains will operate under electric power between London and Newbury, running under diesel traction for the remainder of the journey.

First says it carried out a competitive procurement exercise for the trains and it is close to securing private financing for the deal. The DfT is expected to make a final decision on the order by the end of June, following May's general election. The fleet is due to enter service from December 2018.

Secretary of state for transport Mr Patrick McLoughlin also announced details of improvements which FGW will roll out as part of the four-year franchise extension, which begins in September and runs until April 2019.

FGW plans to increase capacity by three million seats or around 25% across the franchise by December 2018 through the introduction of the SET and the transfer of 58 four-car EMUs from Thameslink for services on the newly-electrified Thames Valley lines from London to Reading, Oxford, and Newbury. The EMU fleet will comprise 21 class 365 EMUs built in the 1990s, 29 Bombardier class 387/1s (currently being delivered to Thameslink as a stopgap due to late delivery of Siemens class 700 EMUs), and eight new class 387/2 EMUs.

There will also be a £30m investment in station improvements, a £3.5m station development match fund, and a £2.5m accessibility fund.