GERMAN open-access operator Hamburg-Köln-Express (HKX), owned by Railroad Development Corporation (RDC), United States, has reached an agreement with FlixBus, a private long-distance bus operator, for FlixBus to market and sell tickets for a daily service that will be reintroduced for seven days during the Christmas and New Year period. 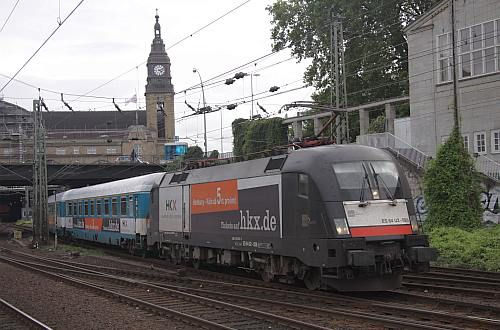 The HKX service was launched by RDC in 2012 but was never profitable.
Photo Credit: Keith Fender

HKX suspended its Hamburg - Cologne service on October 4 and had intended to restart it on December 10. However, the agreement with FlixBus means the service will now operate on seven days between December 22 and January 2, with one round trip per day.

Prospective passengers are being redirected automatically from the HKX website to the FlixBus site where they are able to book tickets. Passengers can also book HKX tickets using the FlixBus app or through its travel agent; the app also provides train information. One-way fares for the 4h 10min Hamburg - Cologne trip start at €9.90.

HKX is the second German long-distance passenger rail operator in which FlixBus has become involved following its agreement in August with Leo Express, Czech Republic, to assist with the revival of another open-access operator Locomore, following its insolvency. As with HKX, FlixBus is selling Locomore train tickets.