BRITAIN’s infrastructure manager Network Rail (NR) has reported that a 300m section of track on the Glasgow - Edinburgh main line could take up to two months to fully reinstate following damage caused by severe weather. 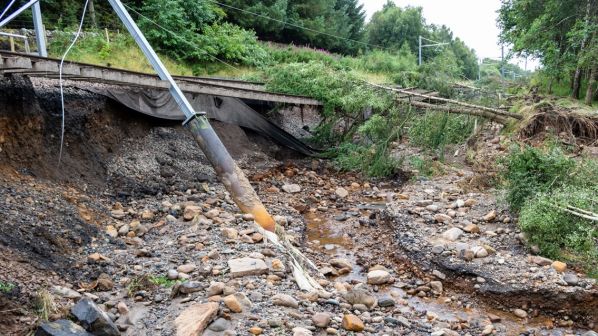 NR says it will work “around-the-clock” to repair the damaged section near Polmont, 5km east of Falkirk, and says that “engineers will continue to investigate the extent of the damage before confirming a final estimate for restoring service.”

NR engineers found in initial assessments made after flood water subsided that sections of track had been washed away, embankments undermined, and overhead electrification masts had been uprooted. The damage also left dozens of uprooted trees strewn across the line, and contaminated more than a kilometre of track and ballast which will need to be replaced.

The damage followed unprecedented rainfall on August 12, which caused a 30m section of the adjacent Union canal to be breached. Consequently, water flooded downhill onto the railway between Polmont and Bo’ness.

NR, in cooperation with Scottish Canals, was able to secure the canal to stop the flooding on the morning of August 14.

NR says the ScotRail Glasgow - Falkirk High - Edinburgh and Dunblane - Edinburgh services will be subject to significant disruption until repairs are completed.

In addition, the London Euston - Edinburgh - Inverness Highland Sleeper service will be diverted via Kirkcaldy and will be unable to call at Falkirk Grahamston, Stirling, Dunblane or Gleneagles until further notice.

The news follows the derailment of the 06.38 Aberdeen - Glasgow Queen Street service near Stonehaven on August 12 due to a landslip. Following the incident, NR announced that it would carry out precautionary measures including a nationwide inspection of higher-risk trackside slopes, to address concerns that the incident had been caused by recent extreme weather.

“Our network was designed for a temperate climate, and it’s challenged when we get extremes such as storms and floods,” says Mr Andrew Haines, CEO of NR. “We’re seeing this more and more, and although we can address them on the ground with precautionary measures, we are acutely aware we need a long-term resolution, and we had already secured additional funding and resources to help achieve this.”