CAF was awarded the contract to supply the eight 245km/h EMUs in 2015. 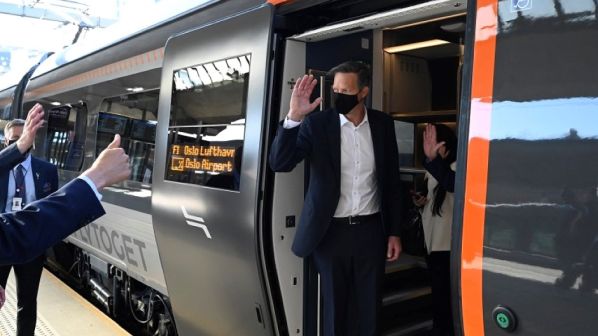 The 245km/h 15kV 16.7hz ac class 78 trains are the fastest to operate in Norway. The EMUs are 102m long and have 236 seats and arrived in Norway as long ago as March 2019 and entered service a year later than anticipated. The operator placed the NKr 1.3bn ($US 160m) order for the trains in March 2015 and testing commenced at the Velim test circuit in May 2018 with further testing taking place on the Norwegian network.

The new trains are supplementing Flytoget’s existing fleet of 16 class 71 three-car EMUs built by Adtranz, which entered service when the line to the airport opened in 1998. The plan was for the fleet of 24 trains to increase the operator’s capacity by 50%. However, Flytoget says that given uncertainty over passengers’ future travel habits caused by the Covid-19 pandemic it is reassessing this plan. It has already sold one of the class 71s to Norske Tog, the owner of Norway’s train fleet, and is not ruling out the future sale of additional trains.

The new trains are 3.3m wide, maximising Norway’s loading gauge in order to offer wider seats and more luggage space than the class 71s. The trains are fitted with at-seat USB charging and power outlets, cup holders and information screens. They also feature LED lights and automatic interior doors, while passengers will be able to see occupancy rates on the train before entering, the first use of this technology in Norway.

“Throughout the process, it has been crucial for us to start with our customers’ perspective and needs,” says Flytoget CEO, Mr Philipp Engedal. “What can we do to offer them an even more comfortable and efficient journey with us? The result has been even better than we hoped for and we are very much looking forward to getting customers on board.”