A new passenger service connecting the capital cities of Ukraine, Belarus, Lithuania and Latvia was launched with a ceremony at Kiev Pasazhyrskyi station on September 28. 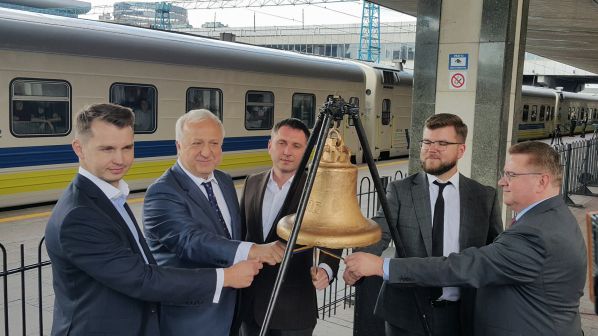 According to Ukrainian Railways (UZ), the first Four Capitals train was formed of one first-class and nine second-class coaches with a load factor of 55% on departure from Kiev.

“Ukraine is getting closer to Europe,” says UZ chairman, Mr Yevhen Kravtsov. “UZ is developing new connections to European countries. UZ is demonstrating renewal of the rail industry and embodies the dreams of people who want to visit European cities.”

UZ is already planning to extend the train to Tallinn. “We are negotiating with Estonia to add a fifth capital to the route, if not this year then next year,” Kravtsov says. “Hopefully by the end of 2018 we will resolve the technical issues.”

Kravtsov says ridership on international trains from Ukraine to EU member states exceeded 270,000 in the first eight months of 2018, a 110% increase compared with the corresponding period in 2017.

Kratsov also revealed at the launch ceremony that UZ is planning to introduce a direct Kiev - Berlin service next year.