Demand particularly suppressed during the second and fourth quarters. 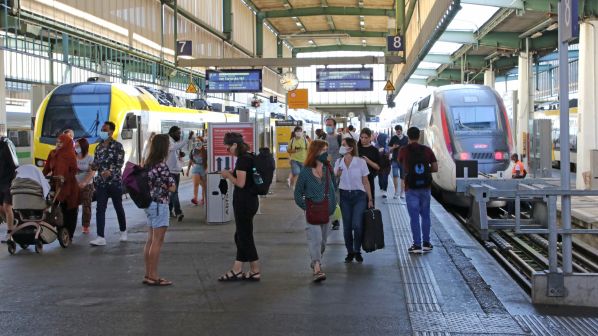 USE of long-distance passenger trains in Germany fell by 46% in 2020 compared with 2019 according to figures published by the German government statistical service Destatis, reversing several years of growth.

There were 82 million long-distance rail passengers in 2020 compared with 151 million in 2019 as coronavirus pandemic lockdowns and restrictions on movement severely impacted demand.

The decline in passenger numbers was particularly concentrated in the second and fourth quarters of 2020 when lockdowns and stay at home orders were largely in place. Long distance rail use fell by 75% during the second quarter of 2020 but by slightly less (-63%) in the fourth quarter.

Open-access rail operator FlixTrain withdrew its services during the lockdown periods and they remain suspended with resumption planned for June.

Long-distance bus passenger numbers were even more badly affected than rail. Just 6.1 million passengers used these services, down 70% from 21 million in 2020. FlixMobility company FlixBus, the largest long-distance bus operator in Germany, suspended most services during the lockdowns. Long-distance bus usage in the second quarter was down 96% compared with 2019, and FlixBus is only now slowly restarting the services.

Use of local rail and tram/metro services fell by around a third (rail -39%, tram/metro -31%). However, as this figure is in part calculated using season ticket sales it may underestimate the actual drop in usage as in many cases the tickets were not cancelled or refunded, but due to home working, were not used much either. Local bus usage, which shares the same statistical basis and potential for overstatement, only fell by 24% for the full year.