Germany long-distance passengers fall 43% in first half of 2020

PASSENGER numbers on long-distance services in Germany fell by 43% in the first six months of 2020, according to figures released by government statistical agency Destatis. 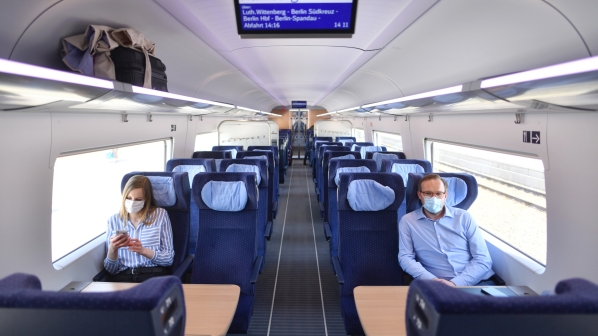 The Covid-19 pandemic situation took another downward turn at the end of 2020 as restrictions tightened following a surge in cases.
Photo Credit: Deutsche Bahn AG/Oliver Lang

While not unexpected, the decline caused by the coronavirus pandemic and the nationwide lockdown imposed from early March was not as severe as seen in other European countries.

The drop compares with a 67% decline in long-distance bus passenger numbers, as dominant operator Flixbus suspended services from March until June. The company also suspended its Flixtrain service in mid-March, resuming some services in late July.

German Rail (DB), the country’s dominant long-distance rail operator, continued to run most services during the pandemic apart from some ICE Sprinter and international services, with train-km dropping by only 13%.

Austrian Federal Railways’ (ÖBB) overnight trains and Thalys’ international services to Germany were cancelled or reduced between March and June.

The number of passengers on regional and urban rail services have not yet been fully calculated. The statistics are based in part on the sale of season tickets and, while these have been purchased, they have not necessarily been used in full.

The analysis uses anonymised movement data supplied by Swiss company Teralytics which is derived from data for around a third of all SIM cards in use in Germany, extrapolated for the entire population.

According to the data, long-distance passenger numbers were up by 9% in January and February compared with 2019, before falling to 22% in April compared with April 2019 and recovering to 50% at the end of June.

This grew over the summer to a peak of around 72% in early August, before dropping to 65% in September and 51% in October.

DB says long-distance advanced bookings were around 75% of 2019 levels in September but this fell to 50% in October following the government’s appeal for people to avoid unnecessary travel.