GO-AHEAD has launched operation of two regional concessions in the German state of Baden-Wüttemberg, marking the British operator’s entry into the German regional market. 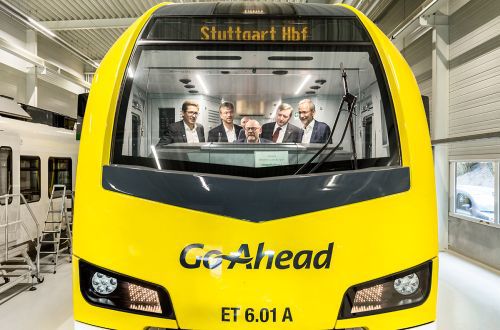 The second stage of the contract is due to commence with the introduction of the December timetable.

In May, Abellio announced it would be required to use alternative trains on some routes in Baden-Württemberg and subcontract other services to DB Regio following the late delivery of a fleet of 52 Talent 2 EMUs by Bombardier.

Go-Ahead services are operated by a new fleet of 28 low-floor Flirt EMUs supplier by Stadler, which are maintained at a new depot in Essingen. All trains are equipped with air-conditioning, folding tables, at-seat power sockets, passenger Wi-Fi, and accessible toilets. There will be between 24 and 51 bicycle spaces on each train, depending on the type of rolling stock and formation.

Go-Ahead and Abellio were awarded the contract by the German state’s Ministry of Transport and Infrastructure in 2015.