FRANCE’s Grand Est region has invited tenders for the operation of trains and the management of infrastructure of several regional lines, some of which are currently closed. 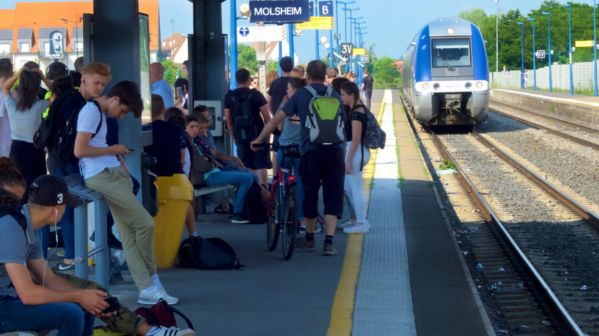 Molsheim is one of the stations on the Bruche-Piémont-Vosges network which is being privatised by Grand Est.

The tenders cover the Nancy - Contrexéville line and a group of lines known as Bruche-Piémont-Vosges, which includes Strasbourg - Molsheim - Saint Dié - Epinal and Strasbourg - Molsheim - Selestat. Both the Nancy - Contrexéville and the Saint Dié - Epinal lines are currently either partially closed, due to the poor state of track, or are at the limit of their capacity.

Bids for the Bruche-Piémont-Vosges lines are expected by September 30. Only companies with an existing operating licence and safety case will be considered. The current contract with French National Railways (SNCF) represents 650,000 train-km a year on both the Strasbourg - Saint Dié and the Strasbourg - Selestat lines, plus 200,000 train-km for an urban shuttle between Strasbourg and Molsheim serving Strasbourg Airport.

The new contract will include maintenance of track and rolling stock comprising AGC and Régiolis DMUs owned by Grand Est and maintained by SNCF. Seven to nine round trips per day are envisaged between Saint Dié and Epinal, with a journey time not exceeding 53 minutes.

The Bruche-Piémont-Vosges contract is estimated to be worth €903m over 22 years, with the operator expected to invest €193m in track renewal and modernisation. Grand Est offers the possibility of compensation linked to the number of passengers and revenue.

The 49km, single-track, unelectrified Strasbourg - Epinal line has been closed between Saint Dié and Arches since December 2018. SNCF Network is currently spending €21m to reopen the line by 2022.

The 66km Nancy - Contrexéville line has been closed between Pont St Vincent and Vittel since December 2016. SNCF Network estimates that modernisation of the line, which is partially single track and is not electrified, will cost €66m. An hourly Monday-Friday service is proposed with a journey time of about one hour.

Grand Est is the only region in France currently planning to put both operation of trains and management of infrastructure out to tender, and is taking advantage of the December 2019 law on mobility (LOM) to transfer the management of minor lines of regional interest and/or low traffic levels to the regions. The region believes that competition will allow the network to be modernised and service frequency increased, thus leading to increased traffic.

Grand Est intends to apply this model to cross-border services to German cities such as Karlsruhe and Saarbrücken. Services on seven cross-border lines will be subject to tenders involving the relevant German states with a view to new operators taking over in December 2024.