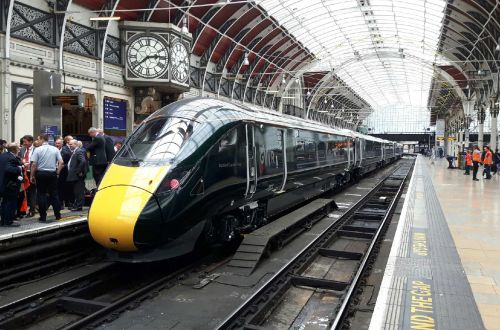 The launch coincided with the 175th anniversary of the completion of the Great Western Main Line (GWML) from London Paddington to Bristol and is a milestone in Network Rail's modernisation of the route.

With the electrification of the GWML suffering significant delays, the DfT revised the specification for the Great Western IEP fleet earlier this year and all of the electric trains will now be supplied as bi-mode class 800 sets. Most of the vehicles for GWR are being assembled at Hitachi's recently-completed plant at Newton Aycliffe in northeast England.

Network Rail plans to energise the first electrified section of the GWML between Reading and Didcot on July 2 and GWR managing director Mr Mark Hopwood told IRJ that testing with class 800s in electric mode will begin on this stretch within the next few weeks.

The first class 387 Electrostar EMUs for GWR Thames Valley services are also undergoing dynamic tests at Bombardier's plant in Derby. The first of these trains will be delivered to Bletchley depot within the next few weeks for shakedown runs on the West Coast Main Line. The class 387s will enter service with GWR on London Paddington - Hayes & Harlington suburban services later this year and will extend their range as more sections of electrification are completed.

The class 800s will be introduced on services from London to Oxford, Bristol and Swansea from next year, and the fleet will also replace HSTs on services to Cheltenham, Worcester and Hereford.

In July 2015 GWR awarded Hitachi Rail Europe a contract to supply 22 five-car and seven nine-car class 802 bi-mode trains, which will be equipped with long-range fuel tanks and higher-rated engines for services from London to Plymouth and Penzance. These trains will be assembled at Hitachi Rail Italy's Pistoia plant and are due to enter service from 2018. The order is being financed by rolling stock leasing company Eversholt Rail Group.

GWR's class 800 and 802 fleets will be maintained at purpose-built depots at Stoke Gifford (Bristol) and Maliphant (Swansea), while the former Eurostar depot at North Pole has been rebuilt to service trains at the London end of the GWR network.