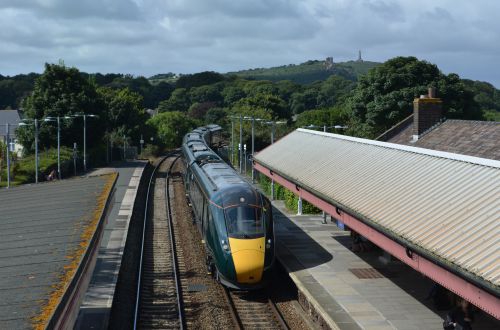 Class 802 No. 802005 arrives at Redruth on its inaugural run from Penzance to Exeter.

The fleet of 36 (diesel and 25kV ac electric) 200km/h trains will be used on services from London Paddington to Exeter, Paignton, Plymouth and Penzance, replacing diesel High Speed Trains (HSTs) built in the late 1970s. The order is being financed by Eversholt Rail Group.

The first three trains were built at Hitachi’s Kasado plant in Japan, with Hitachi Rail Italy assembling the remainder of the fleet at its Pistoia facility in Tuscany.

Hitachi says the final train is now on the production line at Pistoia and is due for delivery in January. According to GWR, half of the fleet is now in Britain and the driver training programme has also reached the halfway mark.

GWR says two five-car class 802s are now available for commercial operation and these trains are expected to enter revenue service next week. Full fleet introduction is expected in early 2019, with HST operation of inter-city services between London and southwest England due to cease by March.

The class 802 is based on Hitachi’s AT300 product platform and is similar to the class 800s already in operation with GWR on services from London to Bristol and South Wales. The class 802 features a revised galley layout and a redesigned brake resistor mounting on the roof to ensure reliable operation on the coastal section of the Exeter - Plymouth line through Dawlish, where waves frequently wash over the line.

GWR says the introduction of the fleet will reduce the fastest Penzance - London journey times from 5h 19min to 5h 5min.