HEATHROW Express services between London Paddington and Heathrow Airport Terminal 5 will continue to operate until at least 2028 under a management contract between Heathrow Airport and FirstGroup subsidiary Great Western Railway, which was confirmed on March 28. 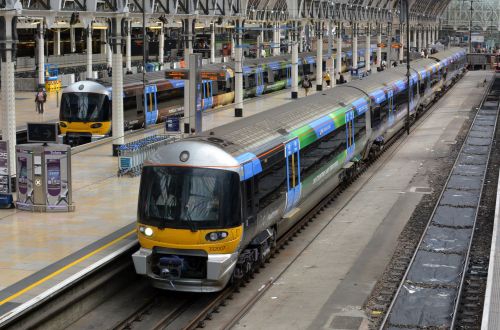 Under the agreement, which has been approved by the Department for Transport, Heathrow Airport will continue to be responsible for commercial aspects of the service, including marketing, ticket pricing and revenue management, while GWR will be responsible for operations.

The contract starts later this year and as part of the deal GWR will manage the introduction of a dedicated fleet of 12 Bombardier class 387 Electrostar EMUs. The trains, which are currently being used on GWR suburban services from Paddington, will be converted to airport express specification by December 2019 with high-speed Wi-Fi, additional luggage racks, and onboard entertainment. These will replace the fleet of CAF/Siemens class 332 EMUs, which have operated Heathrow Express services since the rail link opened in 1998.

The agreement means plans for a new depot for the Heathrow Express fleet can now be abandoned. Heathrow Express must vacate its current depot at Old Oak Common by the end of next year to make way for High Speed 2 and a new depot was planned at Langley on the Great Western Main Line (GWML).

From December 2019, Heathrow Airport will join London’s east-west Elizabeth Line increasing the number of services between the airport and central London from 18 trains per hour to at least 22 trains per hour.

In preparation for the launch of Elizabeth Line services, new contactless smartcard readers will be installed at stations at Heathrow to enable the use of Oyster cards.

Heathrow Airport, the DfT, Transport for London and Network Rail are also carrying out a joint feasibility study into increasing the frequency of Elizabeth Line services to eight trains per hour by the mid-2020s.