Hamburg-Köln-Express pulls out of Frankfurt

GERMAN open-access passenger operator, Hamburg-Köln-Express (HKX), has announced that it will cease operating to Frankfurt and cut back its Hamburg - Cologne service to operate only four days per week from September 1. 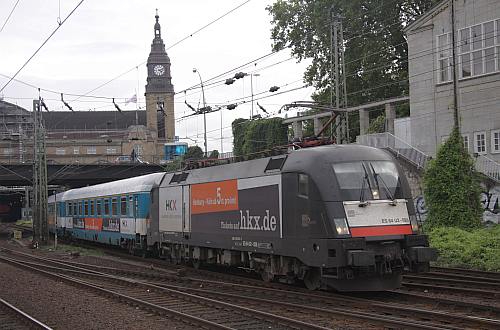 HKX extended its Hamburg - Cologne service, which currently operates on five days per week, to Frankfurt in December 2015 with two round trips per week, but says its journey time of 2h 29min compares unfavourably with German Rail’s (DB) journey time of just 54 minutes by ICE, not to mention the high frequency offered by DB.

“Our experience with different offers and schedules has shown that it is economically sensible for us to concentrate on our original route and provide a good service to our customers,” says HKX managing director Mr Carsten Carstensen. “Of course, this includes offering additional trips on high-demand days.”

HKX will also withdraw its Hamburg - Cologne round trip on Thursdays from September 1 to concentrate on Fridays, Saturdays, Sundays and Mondays.

“With this schedule change, we will meet the desire of many travellers who wish to travel from Cologne to Hamburg at the beginning of the weekend and return late on Sunday afternoon,” Carstensen says. “Our analysis has shown, there is a great need for great deals for weekend getaways from the Rhineland to the north, but there was less strong demand on Thursdays.”

When HKX launched in July 2012 it operated three round trips per day between Hamburg and Cologne, but it has found it very difficult to compete with DB which offers an hourly-interval service albeit with a similar journey time. HKX operates much older trains than those of DB.