The train will operate twice a day on weekdays. 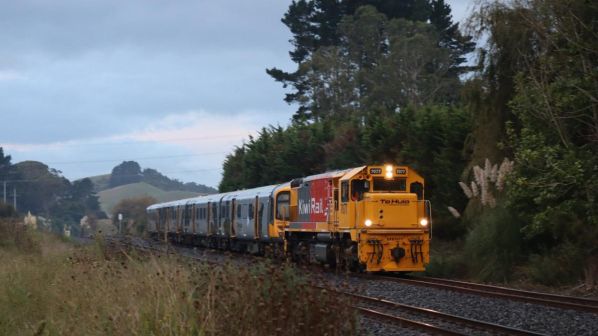 The service will operate twice a day.
Photo Credit: nzrailphotos.co.nz/CC by NC ND 4.0

The government has provided $NZ 85.8m ($US 60.3m) for the trial service, with local authorities providing another $NZ 12.2m.

The new diesel train operates from Frankton via Rotokauri and Huntly to Papakura, where passengers must switch to Auckland electric commuter rail services. During the week, KiwiRail is operating with two northbound trains in the morning, departing at 05.46 and 06.28, with a 1h 38min journey time, and two southbound return trains in the evening, at 16.42 and 18.25. A single return service will also operate on Saturdays. Concession fares to Papakura cost $NZ 12.20 from Hamilton and $NZ 7.80 from Huntly.

Each of the two trains has four coaches with capacity for up to 150 passengers, with another four coaches in reserve. Although there are no Covid-19 restrictions in New Zealand, face masks remain mandatory onboard.

“It has been many years since there has been a new inter-regional passenger train and KiwiRail is proud to be part of making Te Huia happen,” says KiwiRail general manager, Mr Greg Miller. “The 12 coaches being used for the service were completely refurbished at our Hutt Workshops, near Wellington, to a world-class standard. Taking disused old Auckland Transport coaches, they have been given new interiors and wheel units, a stunning paint job, a café and Wi-Fi added, and safety improvements made.”

KiwiRail has hired 20 new staff at its Hutt workshop, with another 13 staff hired to operate the train.

“Up to 73,000 return car trips between Hamilton and Auckland each year would be avoided by Te Huia running at capacity,” Miller says. “That’s fewer emissions, less congestion, and lower road maintenance costs.”