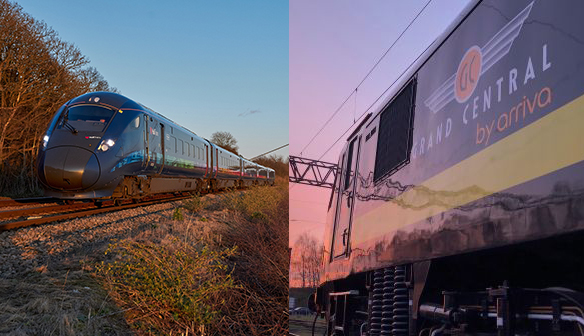 “This news is a positive step for Hull Trains and I want to thank customers for their ongoing support while we steadily reintroduce services,” says Hull Trains managing director, Ms Louise Cheeseman. “Our safety measures remain in place which includes socially distanced seats, a dedicated cleaner on every journey and our brand-new live train tracker tool which lets people see how busy the train is real time before boarding.”

Grand Central, which is owned by German Rail (DB) subsidiary Arriva, will offer three Sunday-Friday services on its West Riding route between Bradford Interchange and King’s Cross, with two trains operating on Saturdays. On the Sunderland - King’s Cross North East service, Grand Central will offer four trains throughout the week, with three northbound services operating on Sundays. All passengers will require a pre-booked reservation to board Grand Central trains.

The operator will also not run services between December 25 and January 1.

“Getting Grand Central trains back out there on our North East and West Riding routes feels like we’re giving ourselves and our passengers an early Christmas present,” says Grand Central managing director, Mr Richard McClean. “To ensure you can travel with confidence we will continue our on-board social distancing rules, and compulsory face-covering policy.”

The suspension of services was the second by the operators this year in response to the coronavirus pandemic. Cheeseman said ahead of the November 5 suspension that the decision was taken to safeguard the future of the business. “It would be foolhardy of us to run trains when people are being asked to stay at home and our business isn’t in a position to be generating an income from passengers buying train tickets,” she said.

Unlike the franchise operators, Hull Trains and Grand Central are not entitled to government financial support through the Emergency Measures Agreement, relying on ticket revenues for the bulk of income.