A new rail link between Arcisate on the Varese - Porto Ceresio line in northern Italy and Stabio, Switzerland, was officially inaugurated on December 22 by Italy’s minister of transport and infrastructure Mr Graziano Delrio. 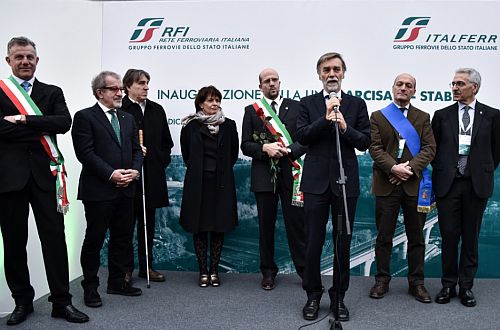 Inauguration ceremony for the opening of the Arcisate - Stabio line.

Passenger services operated by Tilo will start on January 7 from Varese via Mendrisio to Lugano and via Chiasso to Como, while services between Varese and Porto Ceresio will resume following completion of upgrading works.

The main structures on the new line are a 450m seven-arch viaduct, the 950m Induno tunnel, the 970m Bevera tunnel, and a 40m bridge at Baranzella. The line runs through cuttings between 6 and 8m deep in Arcisate and Induno Olona.

The line has a maximum speed of 100km/h and is electrified at 3kV dc in Italy and 15kV 16.66Hz in Switzerland. Three new stations have been built at Induno Olona, Arcisate and Cantello Gaggiolo.