GERMANY's infrastructure manager, DB Networks, has informed open-access intercity operator Hamburg-Köln-Express (HKX) that it can only have three of the six paths it requested for a new service from Bonn to Berlin, which would make the service unviable. 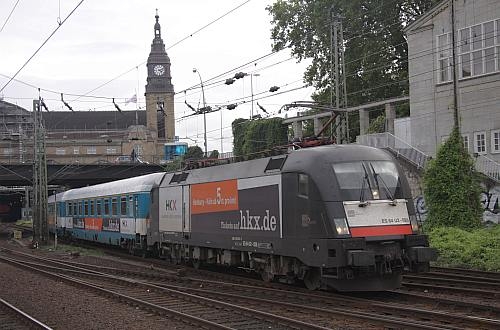 HKX, which has been operating a service between Cologne and Hamburg since 2012, wanted to launch a new service next year of three round-trips per day from Bonn via Cologne, Dortmund and Hannover to Berlin, but DB Networks says requests for paths from other operators means there is insufficient capacity to grant HKX all of the paths it needs during the 2016-2020 planning period.

HKX, which is mainly owned by Railroad Development Corporation (RDC), United States, planned to use 200km/h trains to allow it to offer a five-hour journey between Cologne and Berlin. To reduce costs and improve the viability of the proposed service, the trains would have used what DB Networks classifies as economy paths.

RDC believes that it lost out to a request for more expensive train paths from German Rail's (DB) long-distance passenger business. However, RDC says it accepts the decision as the path allocation system requires DB Networks to take the highest revenue on offer. Indeed, RDC has proposed payment of premium track access charges for its proposed motor-rail service linking the north German island of Sylt with the mainland. While RDC hopes to be granted the paths rather than DB, continued uncertainty around train path allocation for regional services to Sylt means that allocation of paths from December is undecided.

"The level of track access charges is currently too high and is inhibiting the development of rail services," says Mr Hans Leister, RDC's European general director of passenger services. Both HKX and DB have been suffering from intensifying competition from low-cost airlines, long-distance buses which were deregulated in 2013, as well as private cars. "We wanted to offer an alternative here, so it is very sad that we now have to say goodbye to our Cologne - Berlin project," Leister added.