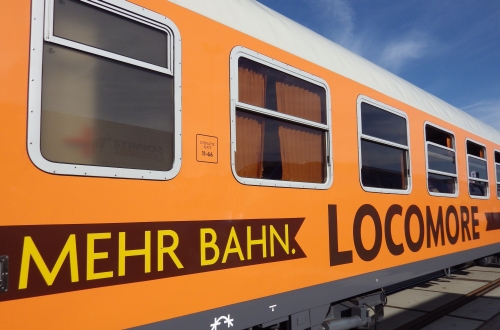 Leo Express is cooperating in the venture with German long-distance bus operator FlixBus, which which will provide ticket sales through its international distribution platform, making Locomore part of its broader network.

Tickets are already on sale on the FlixBus website and to mark the resumption of services 9999 tickets are being made available at a price of €9.90 for travel between August 24 and December 9.

“FlixBus is an internationally-recognised brand and we have proved over the last few years that mobility is not expensive when you achieve the appropriate capacity utilisation,” says FlixBus founder and managing director Mr André Schwämmlein. “We will benefit from the intermodal integration of new target groups for FlixBus into our long-distance network."

FlixBus and Leo Express have been working together in the Czech Republic since 2017 and the bus company is also cooperating with Austrian open-access rail operator Westbahn.

The company is now combining these operations under a new company, FlixTrain. “Intermodal concepts such as the combination of long-distance buses and trains already work in other countries, so we are creating an attractive alternative to the car and we believe that the networking of public transport is the future of mobility,” Schwämmlein says.

Locomore filed for insolvency in May after the company’s revenues fell short of projections.