THE first Stadler Flirt emu for Czech open-access long-distance operator Leo Express has arrived at the Velim test circuit near Prague for trials.

The train will undergo brake checks as well as vibro-acoustic and electromagnetic compatibility testing over the next few weeks. Following the completion of these tests, trial running will switch to the mainline network. 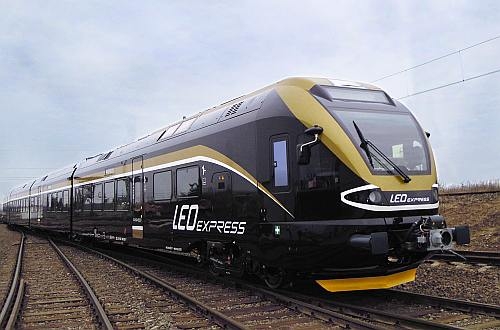 The 160km/h five-car trains are being assembled at Stadler's Siedlce plant in Poland. Each 90m-long train accommodates 212 passengers in economy, 19 in business and six in premium.

Stadler has already handed over two of the dual-system trains and all five sets will be delivered by December, when they will be introduced on the Prague – Olomouc – Ostrava – Bohumin route. Leo Express plans to run eight trains per day on its launch route, competing with Czech Railways (CD) and fellow open-access operator RegioJet.

In addition to its launch route, Leo Express is also considering the possibility of new services from Prague to Vienna, Ustí nad Labem, and Plzen.