Low adhesion identified as preliminary cause of Salisbury crash

RAIB says two emergency brakes were applied in the lead up to the collision. 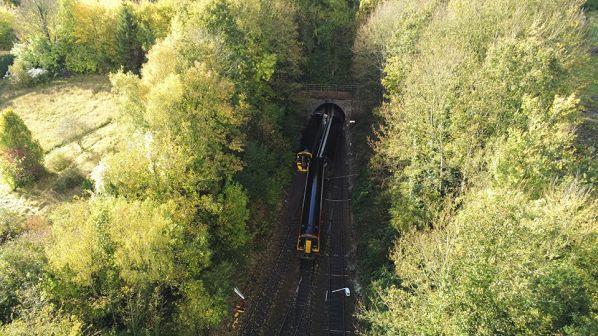 BRITAIN’s Rail Accident Investigation Branch (RAIB) says its preliminary examination of a crash between two trains in Salisbury on October 31 has found low adhesion between the train’s wheels and the rails was “almost certainly” the cause.

The impact of the collision caused the front two coaches of train 1L53 and the rear two coaches of train 1F30 to derail. Both trains continued some distance into Fisherton tunnel following the collision before they came to a stop. 13 passengers and a member of railway staff required treatment in hospital as a result of the accident, which also caused significant damage to the trains and railway infrastructure involved.

RAIB says its preliminary examination found that the movement of train 1F30 across the junction was being protected by a signal on the down main line which was at danger, with this signal passed by train 1L53 by around 220m immediately prior to the collision.

These emergency brakes did not prevent the train from reaching the junction where the collision occurred. OTDR analysis indicates that wheel slide was present both when the driver applied service braking and after emergency braking was demanded. This was almost certainly a result of low adhesion between the train’s wheels and the rails.

RAIB has launched an investigation to identify the sequence of events which led to the accident, which will also consider:

“We welcome RAIB’s update on the scope and aims of its investigation,” says SWR managing director, Ms Claire Mann. “It is right that they look into all the possible causes of the lack of adhesion between the train and the track, and we are pleased their early assessment shows the South Western Railway driver reacted correctly to the signals by braking to slow the train down. We believe his actions went some way to preventing a much more serious incident and we wish him a speedy recovery.

“We will continue to work closely with the relevant authorities and our industry partners on all aspects of the investigation.”

“We want to pay tribute to our driver who was injured on Sunday night,” a SWR spokesperson said. “He is a deeply respected colleague, who has over 50 years’ experience of driving on this route and an excellent professional track record. All our drivers are regularly assessed to the highest standards and he has fully satisfied all requirements. Initial findings indicate that the driver acted in an impeccable way in a valiant attempt to keep his passengers safe, staying at the controls throughout. We thank him for his actions and we wish him a speedy recovery as he continues to be treated in hospital.”

In a joint statement issued on November 4, GWR, SWR and NR said while investigators had handed over the accident site, the line would remain closed until at least November 15.