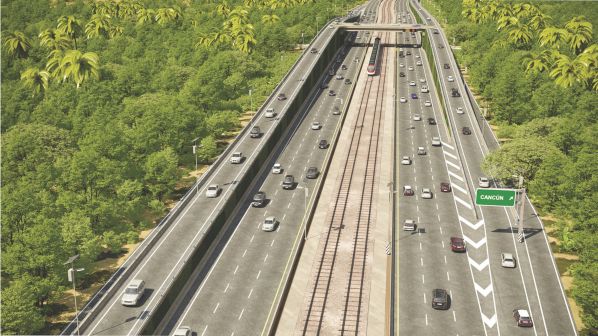 MEXICO’s National Tourism Development Fund (Fonatur) has awarded a Pesos 17.82bn ($US 883.6m) contract for the construction of Section 5 South of the 1452km Mayan Train project to a consortium of Mexican companies.

The winning consortium, led by México Compañía Constructora, alongside Acciona Infrastructure Mexico and México Proyectos y Desarrollos, beat nine other bids to win the contract to build the Playa del Carmen - Libramiento Tulum section, which runs through the median of Highway 307.

The contract will be signed in the next few days, with details of the start of work to be announced shortly after.

Fonatur also opened bidding for Section 5 North on January 27, which will extend the line north from Playa del Carmen to Cancún airport. A winner for the contract is expected to be named on February 10.

Bidding for the two Section 5 contracts, which together comprise a 117km section of the network, began after plans to award a contract for the entire section to a Blackrock Infrastructure-led consortium were declared void in September 2020 due to inconsistencies in the economic proposal. The plans would have seen the railway constructed in parallel to ongoing upgrades to Highway 307 being carried out by the consortium.

Construction contracts for sections 1-4 were awarded in the first half of 2020 while tendering for rolling stock, signalling and operations equipment closed on December 4. The winning contractors are expected to be announced on May 26.

For an in-depth report on the Mayan Train project, see the November issue of IRJ, p 36, or click here.