RUSSIAN Railways (RZD) confirmed that Federal Passenger Company will introduce variable-gauge Talgo trains on Moscow - Berlin overnight services on December 17, when journey times between the Russian and German capitals will be reduced by around four-and-a-half hours. 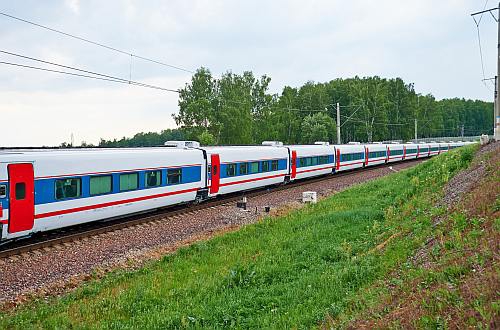 With the introduction of the new trains the westbound journey time will be cut from 24h 49min to 20h 14min while the eastbound train will complete the trip in 20h 35min, compared with 25h 56min at present.

The services will operate twice weekly, departing Moscow Kursk at 13.05 on Saturdays and Sundays, arriving at Berlin East at 07.19 (local time) the following day. The return working will depart from Berlin at 18.50 on Sundays and Mondays, arriving in Moscow on 17.25.

Each 20-car train will be formed of 18 passenger coaches and two technical cars, with dining and bistro cars, and a mixture of first and second class seating coaches and sleeping cars. Deluxe sleeping cars are also provided with en-suite facilities.