NEW track and work to increase the maximum speed of MTR Express trains has allowed the open-access operator to cut journey times between Stockholm and Gothenburg by up to 10 minutes from August 20. 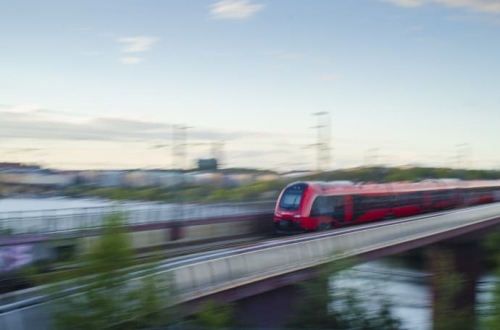 The increased speed came into effect on August 20.

MTR Express, which launched services between Sweden’s two largest cities in March 2015, says there have been a number of operational challenges over summer due to infrastructure works in Stockholm and track renewals between Alingsås and Floby. The Stockholm work ended on August 19 while the Alingsås-Floby renewals were completed on August 13.

MTR Express says the upgraded track, combined with the project it conducted in 2017 to increase the permitted speed of its Stadler Flirt EMUs through curves, has allowed it to reduce the travel time by up to 10 minutes in both directions compared with both spring 2018 and autumn 2017 timings.

MTR previously had a derogation that let its trains traverse curves at 10% above line speed, with the project resulting in the trains receiving a new classification which increased that to 15%.

The only non-stop MTR Express service departs Stockholm at 05.51 on a Monday morning, and can now arrive at Gothenburg Central at 09.00, MTR says, with a travel time of 3h 9min. From Gothenburg to Stockholm, the fastest direct train takes 3h 6min.

"With a shorter journey time and even better timetable, we hope for continued growth, especially in the important business travel segment,” Osterkamp says.