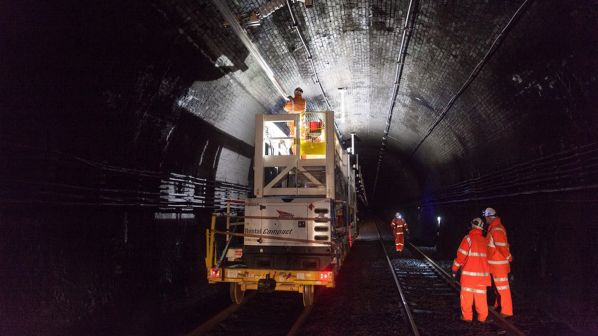 Upgrades to the 134-year-old tunnel took an additional four years after electrification was initially completed in 2016.
Photo Credit: Network Rail

Electrification of the 134-year-old, 6.4km tunnel, which runs 60m beneath the Severn Estuary, was a significant challenge. Work to install 12.9km of 25kV ac overhead conductor rail took place during a six-week closure of the tunnel in 2016. However, humid and salty conditions within the tunnel caused significant problems.

With electrical cables showing early signs of deterioration, the power was switched off shortly after completion of the 2016 project. According to a report by New Civil Engineer in July 2019, as diesel operation resumed, the humid conditions were causing dirt and pollution from the trains passing through the tunnel to stick to sensitive electrical equipment. Earthing components were replaced and subsequently covered in plastic to prevent future deterioration.

NR spent around three years and a reported £20m preparing the tunnel for the resumption of electric operation, employing exterior rail electrification experts to deliver the project.

Around 63 million litres of water are pumped out of the tunnel by the Sudbrook pumping station to prevent it from flooding every day. This facility will also undergo an upgrade as part of the tunnel improvement project. Work to electrify the nearby Patchway tunnels and the line via Pilning to the Severn Tunnel was completed in 2018.

“I am absolutely delighted that the Severn Tunnel is now fully electrified, resulting in a seamless rail link for passengers between Cardiff and London Paddington,” says Mr Mark Langman, NR’s managing director for Wales and Western. “Electrification has reduced journey times between south Wales and London by as much as 15 minutes and provided an additional 15,000 weekday seats compared with a year ago, with the possibility of further increasing the number of services and seats from south Wales in the future.

“It has been a hugely complex task to electrify the tunnel, but I’m thrilled that the final piece of the puzzle is now complete.”

Work on Great Western electrification commenced in June 2010 and was due to be completed in 2016-2017. However, the project ran into major difficulties, causing repeated extensions to deadlines and costs to balloon to around £2.8bn in 2018 from £874m in 2013.

The project was also scaled back to reduce costs. Electrification from Didcot Parkway to Oxford, branches to Henley and Windsor, Cardiff - Swansea, Chippenham - Bath Spa - Bristol Temple Meads, and Bristol Parkway - Bristol Temple Meads were all deferred indefinitely by the government in November 2016. The Cardiff - Swansea project was cancelled outright in July 2017.

Partial electric services have been operating on the route using class 800 bi-mode trains between London Paddington and Didcot Parkway since January 2018, following completion of electrification between Paddington and Maidenhead in May 2017 and Maidenhead to Didcot in December 2017. Services were extended from Didcot Parkway to Swindon in November 2018, Reading to Newbury and Swindon to Bristol Parkway in December 2018, and to Newport and Cardiff Central in January 2020.