BRITAIN's infrastructure manager Network Rail (NR) has finally installed the first kilometre of wiring on the delayed project to electrify the Great Western Main Line between London and Bristol, Cardiff, Oxford and Newbury. 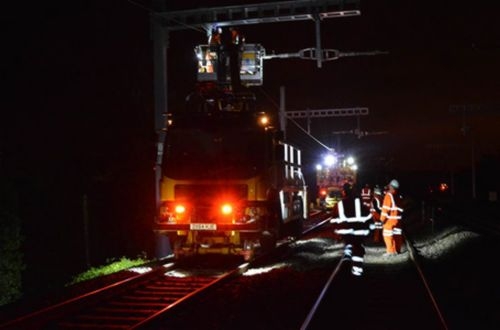 Installation of catenary underway on the Great Western Main Line.

NR says the catenary on the 1km section was installed in 35 minutes on the night of November 12. A further 1.6km of earth wire was installed the following night between Pangbourne and Tilehurst west of Reading, which will become part of the section used to test the new class 800 Intercity Express trains being built by Hitachi Rail Europe.

Bi-mode electro-diesel trains are due to enter service on the route in 2017, with the first electric trains following in 2018. However, there is considerable doubt whether sufficient electrification will be completed in time due to difficulties encountered by NR with the project.