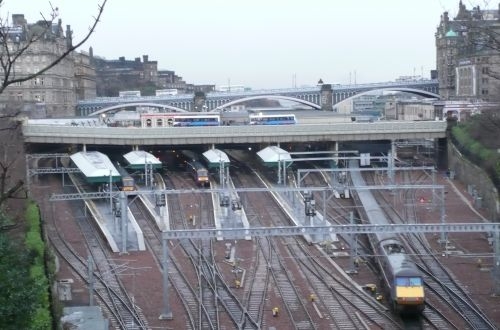 Edinburgh Waverley station is already electrified but some alterations are planned here as well.

NR plans to award contracts early next year to enable work to start by mid-2014. The scheme involves electrifying 156 single-track km, and remodelling and platform extensions at Edinburgh Waverley, Falkirk High, Glasgow Queen Street and three other intermediate stations. In addition, a new station called Edinburgh Gateway will be built along with a new depot at Millerhill in Edinburgh.

Electrification is due to be completed in 2016 allowing journey times to be cut from 51 to 42 minutes for the 76km trip and capacity increased along what is the primary rail connection between Scotland's two largest cities. This will be the third route to be electrified between Edinburgh and Glasgow, following the reopening of the line between Bathgate and Airdrie, and the longer more-southerly route via Carstairs.