NETHERLANDS Railways (NS) inaugurated a new station at Breda on September 8, which is one of the ‘New Key Projects’ to serve high-speed lines across the Netherlands. 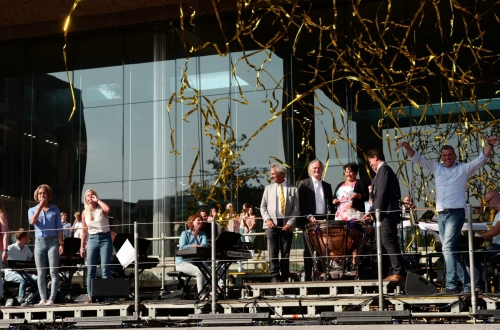 The station was inaugurated by the state secretary at the Dutch Ministry of Infrastructure Mrs Sharon Dijksma, Mr Pier Eringa, the CEO of Dutch national railway infrastructure manager Prorail, Mr Roger Van Boxtel, the CEO of NS, and several regional and local politicians.

The new station, for which works began in spring 2012, replaces the previous Breda station that was built in the 1970s. A new isle and platform was constructed, and Breda station now has three platforms and seven tracks.

The freight yard has been abandoned and is now used for new office space and other commercial buildings. New office space with a total surface of 22,000m2, shops and 147 apartments have been constructed around and on top of the new station.

In addition, a new bus station has been built. There are 720 car parking spaces and 6000 spaces for biciycles.

The new station in Breda will be used by about 57,000 passengers per day. On average there are 16 passenger trains per hour serving the station at present.

Other stations included as part of the ‘New Key Projects’ are Rotterdam Central, The Hague Central, Utrecht Central, Arnhem, and Amsterdam South.