AUTHORITIES in northwest Germany and the Netherlands have reached an agreement to finance a new cross-border regional service between Bielefeld, Osnabrück, and Hengelo as part of the new Teutoburger Wald regional concession, which is due to start in December 2017. 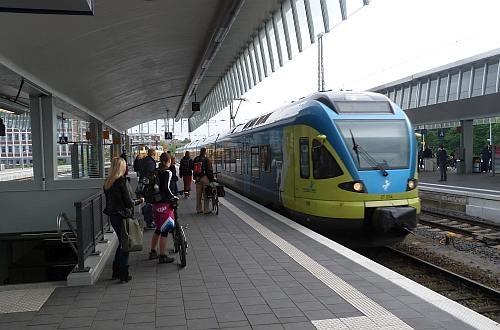 Under the deal between Westphalia-Lippe Local Transport Association (ZNWL), Lower Saxony Regional Transport, and the public transport authorities of the Dutch province of Overijssel and the Twente region, RB61 services currently operated by Westfalenbahn will be extended beyond the border station at Bad Bentheim to serve stations in the Netherlands. The distance by rail between Bad Bentheim and Hengelo is 26.1km, 18km of which is in Dutch territory.

Operating costs for the service are expected to be around €2.55m, of which €1.55m will be covered by Dutch public transport authorities. The German states of North Rhine-Westphalia and Lower Saxony will contribute €250,000 and €750,000 respectively.

At present the only cross-border service between Bad Bentheim and Hengelo is the two-hourly regular-interval inter-city service between Amsterdam Central and Berlin East. In December 2013 the so-called Grensland Express, an hourly regional service operated by Dutch train and bus operator Syntus between Hengelo and Bad Bentheim, was withdrawn due to insufficient ridership. This service was funded by the European Union.

The extension of RB 61 into the Netherlands will require a fleet of trains capable of operating under both the German 15 kV ac and Dutch 1.5kV dc electrification systems.

A tender notice has already been published in the Official Journal of the European Union to invite operators to bid for the contract, which runs for 15 years from December 2017 and covers the operation of around 5.3 million train-km per year. In addition to RB 61, the concession includes four other routes in Germany: