A new German long-distance open-access operator called DerSchnellzug (the fast train) has confirmed it will launch the first of three planned services on March 18 2016, three months later than originally planned, although three special trains will run at New Year. 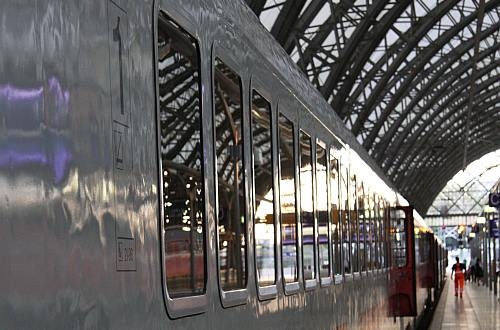 DerSchnellzug has yet to disclose what type of rolling stock it will use, but it is likely it will operate locomotive-hauled trains.
Photo Credit: Keith Fender

Line D1 will operate from Stuttgart via Heibronn, Würzburg, Kassel, Hannover and Bremen to Hamburg on a route not currently served by German Rail (DB) long-distance services. The service will only operate at weekends to start with, although the objective is to provide trains running three times a day.

DerSchnellzug will not compete with DB on journey time as its trains will serve towns off the mainline network. The company will focus on attractive fares, with special offers to target families for example, and the quality of its on-board service. Fresh food prepared by onboard chef will be served to passengers.

DerSchnellzug plans to launch a second route later in 2016. Line D3 will run on Mondays initially from Stuttgart via Pforzheim, Karlsruhe, Ludwigshafen, Koblenz, and Cologne to Aachen.

The company had planned to introduce a third route next year: Line D2 linking Karlsruhe, Heilbronn, Nuremberg, Hof and Dresden. However, the train would have needed to use a line owned by Albtal Transport (AVG) which does not have a safety certificate for the operation of long-distance passenger trains. DerSchnellzug says that this information was disclosed too late for it to be able to apply to DB Networks for a different train path.