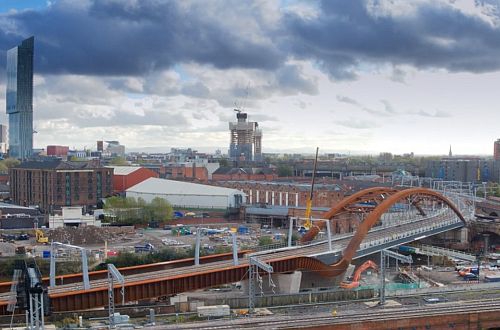 The Ordsall Chord in the centre of Manchester has now been completed.

The link enables trains to run directly for the first time from Manchester Victoria on the north side of the city to Deansgate, Oxford Road and Piccadilly stations on the south side. Britain’s infrastructure manager, Network Rail (NR), says the new link will reduce congestion at Manchester Piccadilly by 25% with some services rerouted through Manchester Victoria.

From May 2018, Northern will introduce direct from services from northeastern England via Manchester Victoria to Manchester Airport.

The centrepiece of the project is a new bridge which NR describes as “the world’s first asymmetric rail bridge.” The chord is also a key part of the Great North Rail Project to improve rail links in northern England.