MOST of Scotland's passenger services are in the hands of new operators with the transfer of the Scotrail franchise from First to Abellio and the launch of the new Caledonian Sleeper franchise. 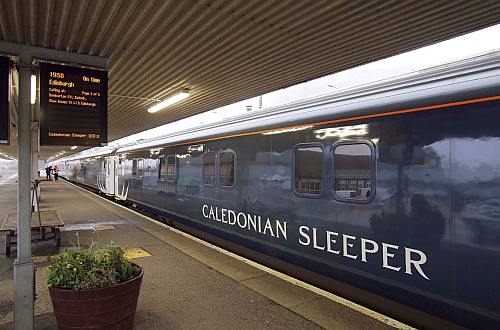 Netherlands Railways (NS) international subsidiary Abellio launched the new Scotrail franchise at Stirling station on April 1, taking over from First Group, which has operated the franchise since 2004.

Abellio will operate the franchise for a minimum of seven years with an option for a three year extension, which will be decided in 2020. The contract also includes a five-year break clause.

The new franchise will see the introduction of passenger Wi-Fi on all trains, £5 advance fares between any two Scottish cities, the rollout of smartcard ticketing, and a 23% increase in the size of the train fleet.

A fleet of 70 new Hitachi EMUs will enter service from December 2017 on services between Edinburgh, Glasgow, Stirling and Dunblane as part of the electrification of these routes. Abellio will also introduce HSTs on services from Glasgow and Edinburgh to Inverness and Aberdeen using trains released by the British government's Intercity Express Programme.

The inaugural Caledonian Sleeper service departed Fort William for London Euston on the evening of March 31, marking the official launch of the franchise, which was previously operated by First as part of the ScotRail franchise. Serco was awarded a 15-year contract last May by Transport Scotland to operate the network of overnight services from London to Fort William, Inverness, and Aberdeen.

In February Serco concluded a £150m contract with CAF for 75 new coaches of five different types, which will enter service from April 2018. With the introduction of the new fleet, Caledonian Sleepers will offer various types of accommodation including en-suite berths, standard berths, standard seats, and pod flatbeds. Each rake will also include a brasserie-style Club Car.

A number of improvements are planned before the introduction of new trains and Caledonian Sleeper has already launched a new online booking and reservation system, which enables passengers to book tickets up to a year in advance.