TRAIN services are to be stepped up on two corridors in Northern Ireland with the introduction of a new timetable on January 6. This follows the entry into service of a fleet of 20 class 4000 dmus supplied earlier this year by CAF, Spain. 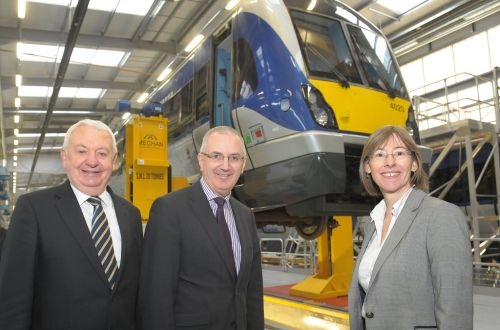 The main improvement is on the Portrush - Colraine - Belfast line where the train frequency will be doubled to provide an hourly-interval service throughout the day, and a five-minute reduction in the journey time. On the Belfast – Larne line, the hourly-interval service from Belfast which currently terminates at Carrickfergus will be extended to Whitehead to provide two trains per hour on this section.

"This new timetable is the next phase of improvements to make our services even more flexible, attractive and easy for customers to use," says Mr Mal McGreevy, general manager rail services Translink, the parent company of Northern Ireland Railways (NIR). "The proof of success is in the steadily growing numbers of passenger now choosing the train as their preferred way to travel. In 2011-12, a record 10.7 million people used the train, which is a 70% increase over the last decade and we are on target to exceed 11 million passenger journeys this year."