A protocol finalising the conditions and parameters for the concession to build the Northern Latitudinal Railway (NLR) was signed in Salekhard on May 12 by Russian transport minister, Mr Maxim Sokolov, Russian Railways (RZD) chairman, Mr Oleg Belozerov, governor of Yamal-Nenets Autonomous District, Mr Dmitry Kobylkin, and representatives of Gazprom and the NLR concession company. 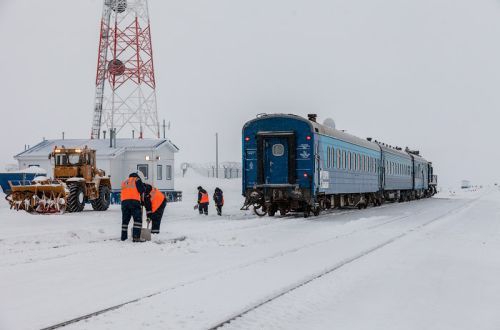 RZD says all documentation required for construction will now be sent to the Russian government for final approval. Design and survey work is underway with the aim of starting construction next year.

Scheduled for completion in 2023, the project is being implemented as a public-private partnership and involves building a 353km line linking Salekhard and Nadym and new bridges across the Ob and Nadym rivers.

Following the meeting, Sokolov, Belozerov and Kobylkin laid a memorial capsule in the foundations of the future Ob bridge.

The line is forecast to carry 23.9 million tonnes of freight, primarily gas condensate and crude oil.

Within the framework of its own investment programme, RZD will reconstruct the adjacent Konosh - Kotlas - Chum - Labytnangi sections of the Northern Railway, including Ob station, and the Pangody - Novy Urengoy - Korotchaevo section of the Sverdlovsk Railway.

Gazprom will complete the construction and commissioning of its own 104km line from Nadym to Pangody.

A special project company (SPC Concessionaire) will be responsible for financing, construction and operation of the Obskaya - Salekhard - Nadym line under the concession agreement.