NETHERLANDS Railways (NS) and Dutch infrastructure manager ProRail have carried out a test run to study the viability of accelerating services between the Randstad conurbation and Groningen in the north of the country. 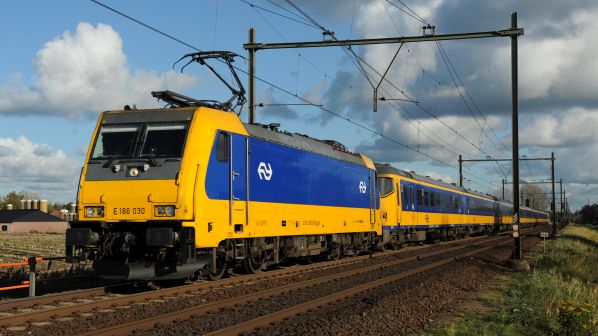 The test run between Groningen and The Hague took place in the early hours of February 2 using a set of ICRm coaches and two Traxx MS2 locomotives. The train departed from Groningen at 00.02 with around 100 passengers onboard and arrived at The Hague Central at 02.23. The 2h 21min journey time was around 15 minutes faster than the scheduled journey time for inter-city services on the route.

The timing was achieved by skipping stops at Assen, Lelystad Centrum and Leiden Central and running at higher speeds. The train reached 163km/h on the Hanze Line between Zwolle and Lelystad, which is equipped with ETCS Level 2, but on other sections was limited to 140km/h, the maximum speed permitted by the ATB-EG train protection system. However, the switch between the two systems was made without any problems.

The aim of the test was to identify what modifications would be required to rolling stock, infrastructure and timetables to achieve reductions in journey times.