NETHERLANDS Railways (NS) has asked the Dutch Consumer and Market Authority (ACM) to clarify its position on plans being developed by the municipality of The Hague for a new open-access passenger service between The Hague and Brussels, which would compete with NS and Belgian National Railways (SNCB) services. 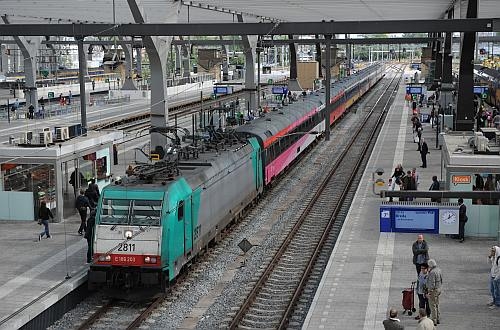 In particular, NS wants the regulator to consider whether the trains would target the Dutch domestic rail market, which is regulated. NS holds the concession to operate the so-called core network, which includes all intercity services and the vast majority regional and suburban trains.

If the new service carries domestic passengers, revenue from this traffic it is not permitted to exceed 0.4% of total turnover.

Meanwhile NS and SNCB have jointly requested 16 paths (eight return workings) in the 2014 timetable for a service between The Hague HS and Brussels South. The service, is proposed as an alternative to the Fyra service which was suspended when the fleet of AnsaldoBreda V250 high-speed emus was withdrawn earlier this year.

In recent years The Hague has become increasingly isolated from the international rail network with the loss last December of the final remaining cross-border services from the city, which as well as being the seat of the Dutch government is an important administrative centre for the United Nations.

A limited company known as The Hague Trains Holding, which is wholly-owned by the municipality of The Hague, has been established to manage the tendering process for the new service. A tender notice was published in the Official Journal of the European Union in March and a preferred bidder is expected to be chosen by the end of this month. The financial risk of operating the service will fall on the train operator as The Hague Trains Holding intends to provide little or no financial support for the services.