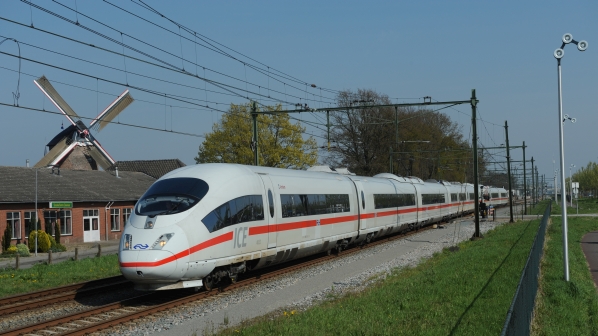 The biggest increase was on the Amsterdam - Marne-la-Vallée route, where passenger numbers increased by nearly 600% due to the introduction of a direct Thalys service to Disneyland Paris.

The biggest reduction was on the Amsterdam - Lille route, where passenger numbers halved due to the loss of a direct Thalys service.

“More people are finding the train a comfortable and sustainable way of traveling,” says NS International director, Mrs Heike Luiten. “For international journeys up to 700km the train should become first choice of travel. Our priority remains to attract passengers up to 700km and make them change from plane to train. However, long distance rail travel must become more attractive, with easier booking and lower prices. NS cannot do it by itself, so we are encouraging other European railways to support this.”

Luiten says a project to simplify booking for 3200 destinations within 700km of The Netherlands is close to completion.

Meanwhile, NS International is trying to improve the offer of international train services to and from the Netherlands. Plans were unveiled last week to add a fourth and fifth Eurostar service between Amsterdam and London, while efforts are being made to cut the six hour journey time between Amsterdam and Berlin. Additionally, NS will support the newly-planned Vienna - Amsterdam Nightjet service operated by Austrian Federal Railways (ÖBB).