NETHERLANDS Railways (NS) is planning a ‘once-only’ test run early next year to establish the viability of accelerating inter-city services between Amsterdam, Zwolle and Groningen. 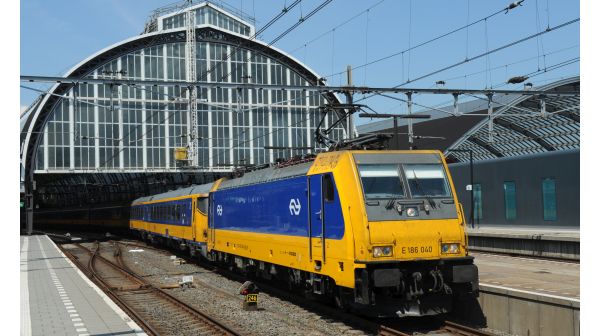 If the tests are successful, NS says it may introduce additional fast peak services on the route, although capacity constraints mean this will not be feasible before December 2020.

The journey time reduction will be achieved by skipping stops at Assen and Lelystad and running at higher speeds on the Hanze Line, which is equipped with both ETCS level 2 and the first-generation Dutch ATB train protection system and cleared for 200km/h operation. Elsewhere on the Dutch conventional network the first-generation ATB limits the maximum line speed to 140km/h.

The test will be carried out using a Bombardier class 186 (Traxx MS2) multi-system electric locomotive and ICRm coaches normally used on IC Direct services from Amsterdam to Rotterdam, Breda and Antwerp via the HSL South high-speed line.

When operating on ETCS on the Hanze Line, the Traxx will be permitted to run at its maximum speed of 160km/h.

The fastest Amsterdam South - Groningen inter-city service in the 2018 timetable offers a journey time of 2h 1min and NS expects the trial run to shave around 15 minutes off this timing.

The test run should indicate what higher-speed operation will require in terms of rolling stock, timetabling and infrastructure.

NS says a further 15-minute journey time reduction could be achieved with the introduction of the 200km/h Inter-City New Generation (ICNG) EMUs, which are due to enter service on all major inter-city routes from 2021 onwards.

NS CEO, Mr Roger van Boxtel, points out that accelerating Amsterdam - Groningen services might also improve links between the Randstad conurbation, which encompasses the Hague, Amsterdam, Rotterdam and Utrecht, and other peripheral areas of the country.

The need for faster connections between the Randstad and Groningen has been a contentious political issue for many years. An Amsterdam - Groningen maglev line was even proposed in the 1990s, but was ultimately abandoned with promises to accelerate services on the conventional network.