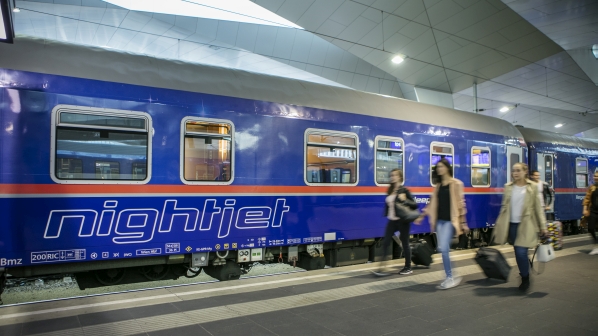 The Zurich - Amsterdam and Zurich - Barcelona services were previously announced by ÖBB and SBB in September, along with a Zürich - Rome service which ÖBB says will also start in December 2024.

The new services are the first step to recreating a Trans Europe Express (TEE) network, an idea proposed by Scheuer in September as a successor to the original TEE network established by French, German, Swiss, Dutch, Luxembourg and Italian railways in 1954.

“With TEE 2.0 and attractive night train offers on the railways, we will be even more climate and environmentally friendly in Europe in the future,” Scheuer says. “This is a very concrete result of our Rail Summit and our EU Council Presidency.”

“Europe’s leading railways are joining forces for the night train,” Lutz says. “This is a good day for the climate, our customers and the growing together of Europe by rail. Night trains are a business between partners. If every railway did ‘a bit of night train,’ nobody would be helped. The solution is a clear division of labour, embedded in genuine team play.”

“Only through intensive cooperation between the railways in Germany, France, Switzerland and Austria can we significantly expand the Nightjet network and thus offer even more climate-friendly mobility in Europe,” Matthä says. “With Paris, Berlin, Amsterdam, Brussels, Zurich, Vienna and Barcelona, even more European metropolises will in future be connected overnight with the Nightjet in an environmentally friendly way.”

“This cooperation is a good opportunity for SNCF to complement its national night train service with an international offer,” Farandou says. “Night trains are historic for SNCF. The interest and enthusiasm of passengers and the authorities is great, because these trains are essential for linking our regions. We are convinced that, together with our European partners, we can benefit from the experience of the Nightjet to promote an attractive European night train service.”

“The expansion of international day and night rail services is very important for Switzerland,” Ducrot says. “This cooperation will now enable us to implement our expansion plans quickly. In the night-time traffic segment, we will thus expand the range of services from Switzerland from six to 10 lines to 25 destinations by 2024. This is a very important contribution to promoting climate-friendly mobility.”

The Alliance of Passenger Rail New Entrants (AllRail) said that while it believed that night trains could make a comeback as a sustainable alternative to late night and early morning flights, the model proposed by the national operators has failed in the past, and private operators should have been included.

“It might seem that the more new services, the better,” says AllRail secretary general, Mr Nick Brooks. “But Europe should not fall into this trap. In this era of the Green Deal, we risk public money killing off private investment.”

Czech private operator RegioJet, which runs night train services in the Czech Republic, Slovakia, Hungary and Croatia, said it was important that the cross-European night train strategy includes more players to make it more attractive for passengers across Europe.

“We fully support such an initiative - if it is based on the open access to the infrastructure, independent sales channels and fair transparent financing for all who want to join,” the operator says.

In 2021, RegioJet is planning new night train connections to Poland and Ukraine, followed by other European countries. The operator launched overnight services in June between Prague and the Croatian coastal town of Rijeka, via Pardubice, Brno and Břeclav in the Czech Republic, Bratislava in Slovakia, and Csorna in Hungary.

RegioJet says the service carried 65,000 passengers over three months, with an average occupancy rate of more than 90%. All of RegioJet’s night services are operated on a commercial basis.