SNCF CEO Mr Guillaume Pepy and the mayor of Paris Ms Anne Hidalgo presented plans on June 24 to expand capacity at Gare du Nord, Paris' busiest station which is used by up to 800,000 passengers per day. 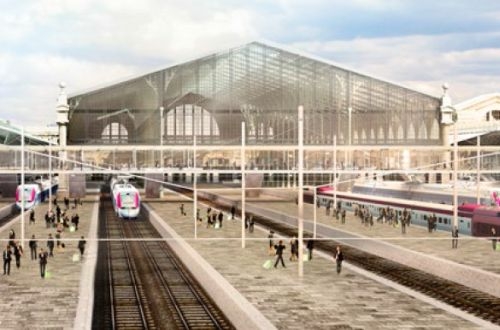 The first phase includes restoration of the existing buildings dating back to the 1860s and significant expansion of the space available for Eurostar services to London, with new mezzanine waiting areas envisaged above the tracks and a new business class lounge in space formerly used as a hotel. This phase also includes the refurbishment of the underground four-track RER station serving lines B and D, which is used by 80% of Gare du Nord passengers.

The first phase should be completed by 2018 as part of improvements totalling €500m being undertaken by SNCF at other major Paris stations.

Plans for significant expansion of the station between 2019 and 2023 have been drawn up by architects Wilmotte & Associates working with SNCF. These include a new departure hall located on a 250m-long by 30m-wide glass-sided bridge, and a new eastern passenger terminal and retail space above the platforms, which would become the future access point for passengers arriving by taxi, car or bus and enabling the the front of the station to be pedestrianised.

Detailed planning work will be finalised in 2015-16 with both SNCF and the City of Paris working with national heritage bodies and the French government to agree the plans and funding. Pepy says the final cost will not be known until the detailed design is finalised.

Hidalgo says these plans for Gare du Nord support the recently-announced bid for Paris to host the 2024 Olympic Games.

Artist's impression of the redesigned RER Line B platforms at Gare du Nord.