REGULAR passenger services returned to the Swedish town of Trelleborg for the first time since the 1970s on December 12, when Skånetrafiken introduced Pågatåg regional services on the 34km Continental Line from Malmö. 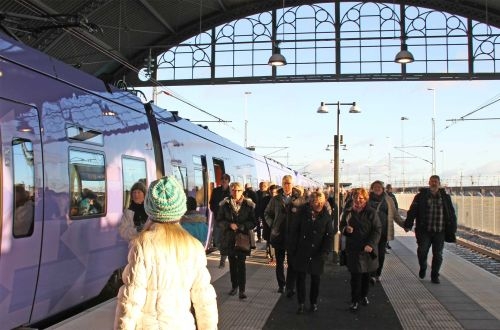 Trains operate at half-hourly intervals for most of the day, with a journey time of 35 minutes between Trelleborg and Malmö Central. Copenhagen can be reached in less than an hour by changing trains at Hyllie station in Malmö.

In preparation for the restoration of passenger services, infrastructure manager Trafikverket has invested SKr 490m ($US 57.5m) in the modernisation of the Continental Line including upgrading track for 160km/h operation and the construction of two new intermediate stations at Ostra Grevie and Västra Ingelstad. Trelleborg station has also been restored and upgraded as the town's main public transport interchange.

Previously the only passenger traffic on the line was the summer-only Berlin - Malmö train, which travelled between Germany and Sweden via the Sassnitz - Trelleborg train ferry, although the electrified line remains a busy freight route.