POLISH long-distance operator PKP Intercity has announced it will invest Zlotys 19bn ($US 5bn) to expand and modernise its rolling stock fleet and introduce new services, after signing a new Zlotys 21bn 2021-2030 public service contract (PSC) contract with the Ministry of Infrastructure that looks to position rail as a major player in the Polish passenger transport sector. 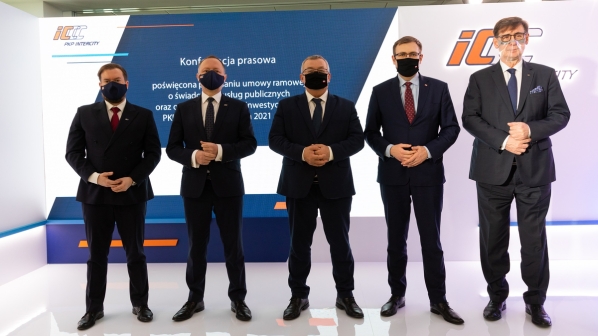 The operator says it is looking to promote rail as the main form of long-distance transport in the country in order to reduce emissions in line with the goals of the European Green Deal, and is also planning to increase accessibility to rail by adding new services.

“PKP Intercity is entering the new decade with the important task of completely transforming domestic passenger transport, heading towards the end goal of a modern railway with an intermediate, important goal of achieving climate neutrality,” says Mr Maciej Małecki, secretary of state in the Ministry of State Assets. “Huge investments that will be carried out during this time should provide a strong boost for the Polish economy and great opportunities for Polish companies with which our national carrier cooperates. It will be a decade that will be beneficial for everyone.”

In order to support this increase in services, PKP Intercity plans to purchase a number of new fleets, including:

In the coming years, PKP Intercity will also work on developing a consistent timetable which will ensure a stable and predictable offer for passengers.

“The coming years will show the incredible synergies which will be achieved thanks to the billions in investment which we have been carrying out for several years,” says Mr Krzysztof Mamiński, chairman of the supervisory board of PKP Intercity and CEO of PKP. “Modernised lines and stations and modern rolling stock will allow faster, more comfortable and safer journeys across Poland. The time of the pandemic has shown how important it is to have public utility services based on stable financing.”

“This is an extremely important agreement, thanks to which passengers will benefit from a constantly growing offer of connections served by modern trains,” says PKP Intercity CEO, Mr Marek Chraniuk. “It is worth emphasising that in 2030 all PKP Intercity rolling stock will be new or modernised, which will ensure a high level of travel safety and comfort.”

For detailed data on fleet orders from Poland and around the world, subscribe to IRJ Pro.