New tunnel will increase daily capacity at Frankfurt Main Station from 1250 to 1500 trains. 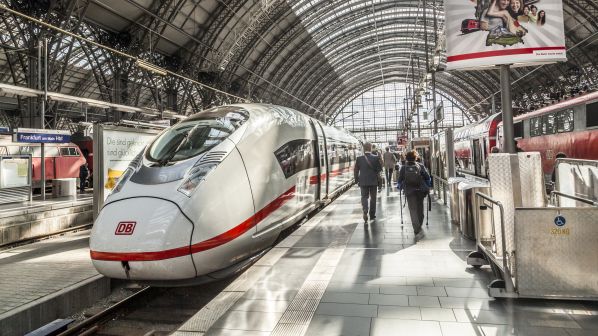 DB Networks has begun the formal planning and consultation process for the proposed new cross-city mainline tunnel beneath Frankfurt am Main.

The double-track tunnel will include a four-platform underground station 35m below the existing Frankfurt Main Station and is seen as an essential component of the infrastructure required for the planned regular interval national timetable, although it will not be completed in time for the planned 2030 Deutschland Takt launch date.

The 7-10km tunnel will increase the capacity of Frankfurt Main Station from 1250 to 1500 trains daily. Up to 12 trains per hour in each direction will use the new tunnel, mostly ICE high speed services although new Hessen Express regional services linking Wiesbaden with cities east of Frankfurt are also planned.

The planning work is based on a 2019 feasibility study undertaken for the German federal government. Initial geological investigation has shown the tunnel is feasible within the €3.6bn budget.

Three overall route options with 194 variations were considered, but both the northern and central options have been discounted as they would pass under multiple high-rise buildings in Frankfurt city centre. The southerly route avoiding much of the city centre and running in part under the river Main is preferred although some details are yet to be established and several permutations are being considered as part of the public consultation process.

The southerly route also offers better connections at the eastern end to both existing routes to Hanau, which are already used by ICE services to northern, eastern and southern Germany and Austria. At the western end, the new tunnel will begin east of the existing Frankfurt Main Station with a new double track bridge over the Main built alongside the existing pair of double track bridges at Frankfurt Niederräd.